Posted by Thomsen 14 years, 4 months ago in News & Updates, WordPress

Earlier today Matt announced that WordPress version 2.6 is available. It’s been codenamed Tyner after the famous jazz pianist McCoy Tyner. It’s released one month ahead of schedule and includes dozens of incremental improvements to the features introduced in version 2.5.

A 3 and a half minute video tour is viewable below:

Updating is straightforward and didn’t break any of the plugins found working with the last major update. All in all I estimate the upgrade to take less than 15 minutes including deleting and re-uploading through FTP.

I strongly encourage everyone to apply the update as it fixes approximately 194 bugs besides offering full SSL support in the core, and the ability to force SSL for security (new cookie setup). It also includes speed improvements and a Wiki-like tracking of edits.

Again, I must admit I haven’t been able to run the testing for more than an hour, so there might be a few incompatibilities still not discovered. Feel free to share your findings, and also let me know how you experience the speed and overall â€œlook n’ feelâ€ of the site.

Posted by Thomsen 14 years, 7 months ago in News & Updates

It’s been a few years since we last updated our “landing page”, evaria.com. I’ve been thinking about this a lot lately and finally decided to do something about it today. Not that the old front-page was that bad; 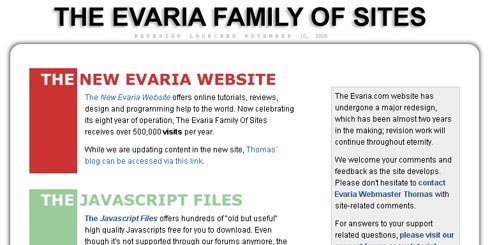 However, stating redesign launched 2005 doesn’t sound to promising. Thus I’ve completely redesigned the front-page and included one of my favourite photographs along with automatized daily updates; 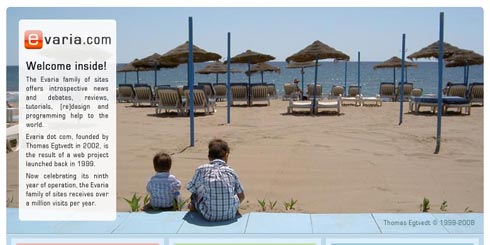 More specifically the content will update itself whenever something gets published at evaria.com. This is accomplished using a PHP script that automatically grabs the latest updates from my RSS feeds. This way new visitors will always find their way to the latest news and the page suddenly appears much more useful than the old static one (can’t believe I haven’t done this ages ago).

The photo mentioned above features my two sons sitting on the beach 17th May 2007 in Fuengirola, Spain. We had been celebrating the Norwegian national day and were taking a well deserved break. I feel the photo reflects harmony and tranquillity, which is one of the reasons I like it so much, besides the obvious.

I would really appreciate comments/feedback regarding the new front-page. Anything from a web designers point(s) of view to personal opinions.